Have you been wondering where in the world I went? Sometimes you just have to experience life while it is happening. That is exactly what I have been up to:)

I learned a lot of Ruby in a short amount of time and really needed to digest before blogging about it.

What I like the most about Ruby is that it is an Object Oriented Programming language (OOPL).

Here are a few small projects that I worked. Each project was scripted with Ruby and then ran using the terminal.

One of my last assignments for the Web-development course was to create an ‘advice web page’ with HTML and CSS for people who are learning to code.  Here is my advice for all the code newbies out there! 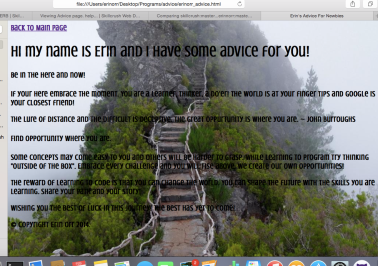 After struggling to get this baby pushed to GitHub, I decided that the next step for me was to take a class on GitHub itself.

I understand the purpose of Git and GitHub,  but haven’t mastered using the platform. I am now signed up for this free course by Udacity.

Although the Web-Developer course through Skillcrush officially ended on February 6th. I have access to all the material forever! Just another reason I highly recommend using Skillcrush.

A very special Thank YOU for all the Skillcrush instructors and classmates!

For starters, I ingested a lot of history on Ruby. Thank you Skillcrush! It is a fascinating language and I can see why there is such demand for it. Here is another article stating so.

YES! That is Star Wars, and yes you can sit and watch the entire result if you wish. #Geek

Mid-week it was time to install Ruby. I was feeling pretty lucky since my iMac came with the updated Ruby already on it. But then I found out that all UNIX products come with Ruby installed. Thank you Apple!

Installing “Ruby is the hardest step in learning it.” At least, according to the programming community.

Below is another screen capture, this time of my work with IRB (Ruby) in the terminal. 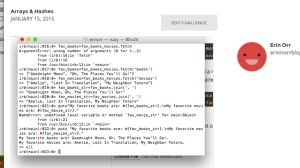 I also was introduced to NIL, or nothing.

Last but not least I am reading my very first programming book. It is called _Why’s poignant guide to Ruby and it’s written by a “mystery guy” or x-mystery guy. His name is _Why. It is really funny and hard to put down.

Ruby and I are off to a great start!

Labyrinth .. A path for the right brain.

I had a small break in my Skillcrush Developer Blueprint before starting the Ruby lesson.  I thought it would be good for me to keep coding. Practice makes perfect! I found a free course on Ruby through Codeschool.

It has 7 levels and teaches objects, methods, arrays, etc.  The course required a blog entry using Ruby, which I enjoyed.  As you know, I enjoy blogging!

The Codeschool course gave me enough insight into the Ruby language and inspired me to learn more. I found the initial tasks fairly easy. 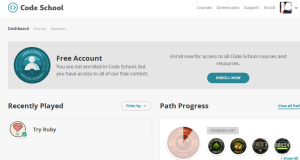 After completing Codeschool I feel confident that I will be successful in attempting more difficult concepts within the Ruby programming language.  I suggest you try as it builds not only knowledge of the language, but also confidence.

I recently read  ‘A whole new mind why right brainers will rule the future.’ I found the topic of the Labyrinth to be particularly interesting.  While I was visually familiar, I had not really understood its background. What does walking a labyrinth do for people? Hospitals have begun to add them within their construct. A lot of people claim to pray, find peace, or solve difficult problems by walking them. I find that fascinating.

David Tolzman (he design the Labyrinth at Johns Hopkins) stated:

“As the left brain engages in the logical progression in walking the path, the right brain is free to think creatively.”

You can find a labyrinth near you by going to this site http://labyrinthlocator.com/

Last but not least, my awesome mentor @sorriv and handsome hubby purchased a Mac for me to use for #hackingmyeducation. I am very thankful for his constant support.